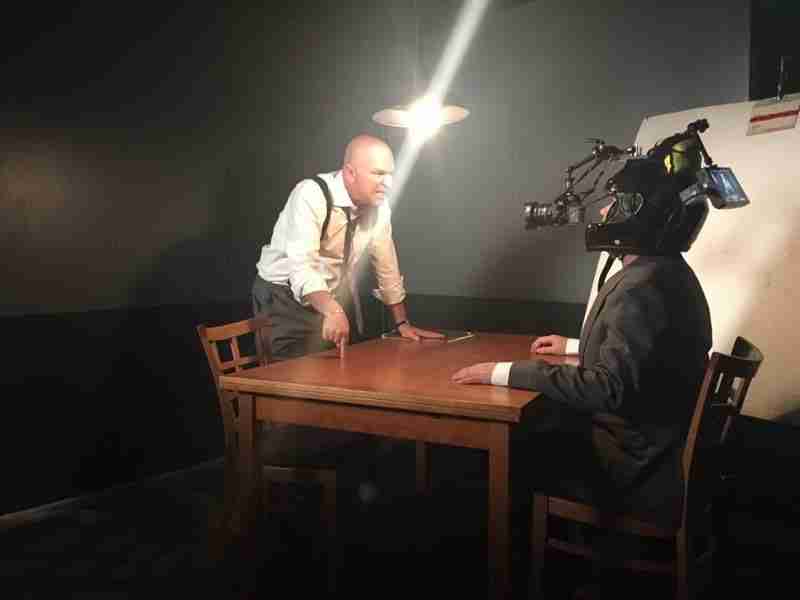 There have been recent… bizarre sightings in Las Vegas lately- and no, I’m not talking about the GOP or DNC’s Presidential hopefuls (though, they are a couple bizarre characters). 84.9% of land in Nevada is owned by the federal government, and Lord knows what they do with it; but just as in Arizona and New Mexico, rumors of flying saucers, aliens, military tests, etc., constantly abound. Add to all of this, the craziness of the “what happens in Vegas, stays in Vegas” m.o. that we have going here, and you can imagine all the interesting and intriguing things that pop up from time to time. One such photo hit my desk over the weekend. Of course, my first reaction was- Metro must be grilling some punk from EDC. Then I thought, no… no that’s not it, he’s wearing a suit. So, then I thought, the FBI is interrogating some international motorcycle gang leader who is trying to establish roots here in the casinos or entertainment industry. But that doesn’t make sense, there’s no bike in the photo. So, then I went where I should have from the beginning, it’s an alien. That made the most sense when I got the second photo, which clearly shows a statue of what must be his idol, Boba Fett, just over his shoulder. Time will tell if we’re about to be invaded and most likely enslaved- seems like Will Smith should have come back for the sequel. Well, I’m going to go pack a suitcase and get ready to escape to the hills. Godspeed to all my Las Vegas video production friends… even the Canadians, I guess.

Oh, if you have further questions, maybe this man can help:
Clayton Moore
Cinematographer
792.275.1429
ClaytonMooreDP.com